Some inexpensive Powerbanks, which we bought at Poundland, a high-value discount store where most things cost just £1 GBP. We saw these Powerbanks a long time ago, but never decided to buy them – and regretted it. They were out of stock for a few weeks, but finally came back into our local store recently. They come with the Powerbank, a keyring, a cord and a small USB micro cable (about 15cm). 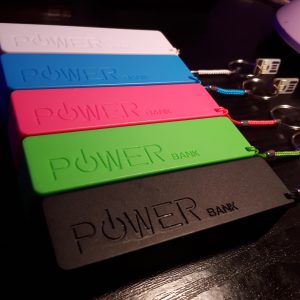 The capacity is rated at 1,200mAh. The Powerbank outputs a maximum of 1A at 5V, anything higher than an amp and the Powerbank struggles. When the capacity runs down, the power output is adjusted downwards to remain active. They are charged between 800mAh and 1000mA so a standard Wall Adaptor USB Plug will charge these just fine. While these are rated 1A, I wouldn’t rely on them for anything above 500mA. Still, as an inexpensive power source for small projects, you cannot beat the affordability. 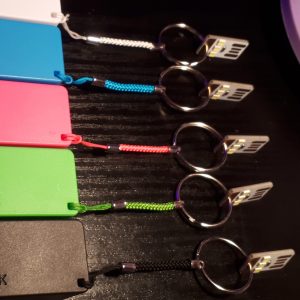 Coupling these Powerbanks with USB key-chain 3 LED light circuit boards is an excellent idea. We bought these chip based USB plug devices from China on eBay for £1.98 for 10 pieces. They are exceptionally bright, and will last a while using one of these Powerbanks and make great emergency lights.

These tests are based on using a KCX-17 USB Charge Monitor with a Drok Resistive USB Discharge Device running at a load of 500mA until the Powerbanks cut-off voltage was reached. This table does not account for the losses converting from the Lithium cell’s 3.7 volts to 5 volts.

Capacity however is what lets these Powerbanks down. While they claim 1200mAh, the cells are closer to 1,000mAh, and with conversion to 5v this capacity drops further to around 700mAh. All things considered though, you get not only the plastic case, circuit board, 18650 cell, cord, keyring and a USB cable there’s nothing stopping you opening up the Powerbank and adding a better 18650 cell (for example an unprotected 2,500mAh Samsung INR-25R for about £11.15 for two). These style plastic powerbanks are available without cell from China for 99p which in itself is good value, adding a lithium cell to them and selling them for £1 is great economy.

P.S: The only colour we don’t have is the Orange Powerbank, as they did not have any of those left.